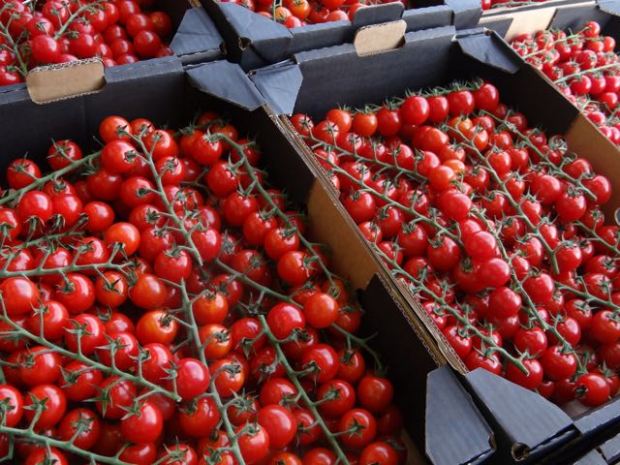 Last week the Bristol Food Connections festival explored “all that is GREAT about food in Bristol (and beyond)” [1]. This made me realise that what I am exploring are the separations in our global food system. While so much of food in Bristol is ‘GREAT’ there is still much work to do about what is NOT SO GREAT. In the global food system, the separations between those who produce and those who consume what is transported around the world are many: income, origin, lifestyle, language, history, opportunities, culture, diet, microbiome – you name it there are separations in the way we eat and live.

This weekend I co-facilitated an event, Philosophy Breakfast: The ethics of global food production, with Julian Baggini, philosopher and author of the book, Virtues of the table: How to eat and think, [2]. Julian focused our thoughts on ethics and justice, and I grounded us with a case study, on tomatoes produced in Morocco, based on my recent fieldwork. We were treated, literally, to food for thought, in the form of a breakfast bap and coffee from the Boston Tea Party as well as a full house of attendees ready and willing to reflect on their role in the food systems. I was determined that this group, who had been motivated enough to get up for a 10am Sunday start, also be given space to tell us what we should be considering in relation to the ethics of food. So, we invited each table to choose a breakfast food element to reflect upon, bread, coffee, tea, bacon, tomatoes and mushrooms, as they slowly digested its nutrients and food dilemmas.

Framing the session Julian considered our role as consumers by drawing on the thoughts of some classical philosophers from Plato to Sen: we should not, he suggested, be afraid of always getting everything right, but we should at least do our best to avoid contributing to what we find clearly morally wrong. How to go about this? I asked our participants to think of questions which might help us reflect on each of the breakfast items to help us consider these dilemmas. Furthermore, perhaps we might have questions for others; for the supermarkets, for the governments, and for the companies involved. My favourite question from this savvy group was, for meat: “was it worth an animal dying for me to eat this?” something that connects to my blog on the great value of seeing meat as sacrifice: ‘L hawli‘. 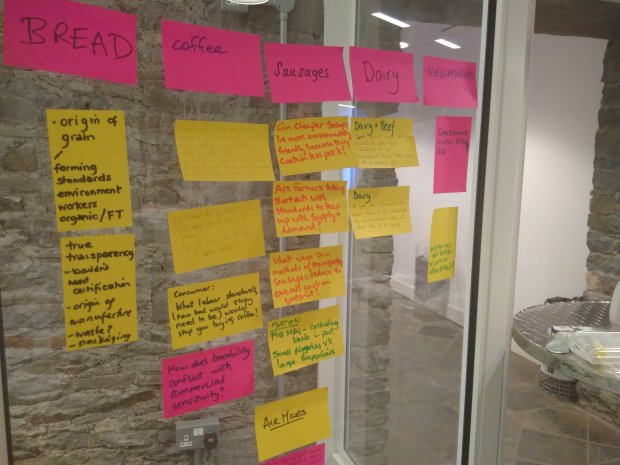 My talk related more to the question about coffee, “What labour standards (how bad would they be) would stop you buying coffee?”. What a question. International labour standards usually boil down to a mutual agreement that the countries involved in trade will apply their national labour laws. They may also be required to ensure that these national laws meet international standards, but what are these international standards? Since the 1998 ILO Declaration on Fundamental Principles and Rights at Work (ILO, 1998) [3], international labour law has been focused, or in practice narrowed, depending on your perspective, to just eight core conventions covering four areas (collective bargaining, forced labour, child labour, non-discrimination at work), out of a possible 189 conventions covering many other very important areas [4]. So this is a relatively weak starting point, which in most cases simply attempts to ensure already existing minimum standards (laws) are implemented.

What happens also, when national laws do not meet the needs of workers? Too often agricultural work is excluded from normal labour standards, or minimum wages are lower in this sector. This is not just the case in poorer countries. In the USA, the world’s richest state, many agricultural workers are exempted from minimum wage and overtime entitlements of the main national labour legislation, the Fair Labour Standards Act [5]. This is discrimination sanctioned by law.

Such discrimination between agriculture and other sectors is also the case in Morocco, where I carried out fieldwork. Whilst the legal minimum wage in other sectors is £8.29, the minimum day wage for agricultural workers is significantly lower at £5.37. OK, you may think, but life is cheaper there. Not that much cheaper. We can convert that minimum agricultural wage to a UK equivalent via the Purchasing Power Parity formula, (or PPP) this tells you what the equivalent wage would be in the UK. That equivalent of that minimum agricultural wage in a UK context with UK housing, food and other costs would be £13.51. This is not enough to live comfortably, barely enough to survive.

This is why then, the first findings chapter of my thesis is entitled “No Money”. If a major supply chain, feeding us year round with produce that we increasingly depend upon, rests on a starting point of an unreasonably low minimum wage, we cannot consider this a socially sustainable global food connection. And it is a connection. Although we are separated by distance, language, culture and long food chains, it was not difficult to find tomatoes just on our doorstep. Even last week when the ‘counter-season’ was officially over (as we now produce more in the UK so there is less market for non-EU producers) I could easily identify tomatoes in Bristol from a major company in business just outside of Agadir, Morocco (where my research is focused). I know workers from this company’s greenhouses and packhouses and spent months in daily conversations with them about what needs to change. They are calling for increases in wages and working conditions, better childcare and better social infrastructure. The separations then, are there to be bridged.

Transparency came up a lot on the morning of our event. How is there so much information about the attributes of food itself, and so little about those that produce it? We can only find out about food if actors involved in the sector are willing to be open (governments, retailers, employers). This showed at the Bristol Fruit Market, which I also visited as part of the Food Connections festival. The openness of the owners to discuss their business and show us around their distribution centre was in very clear contrast to the supermarket distribution centres which are shrouded in secrecy. Yet this is not the case at every stage of the process and it is only by asking questions, and showing that we care, that we can have any leverage at all to shift the harshest dynamics of global food systems.

Why are wages so low in the food sector? How can we revalue food? How can we keep alternative routes to market going (such as through wholesale)? How do we know if workers are treated fairly? What does that mean? How can we improve social and labour conditions in global production? These some of the questions that I am working on at the moment.